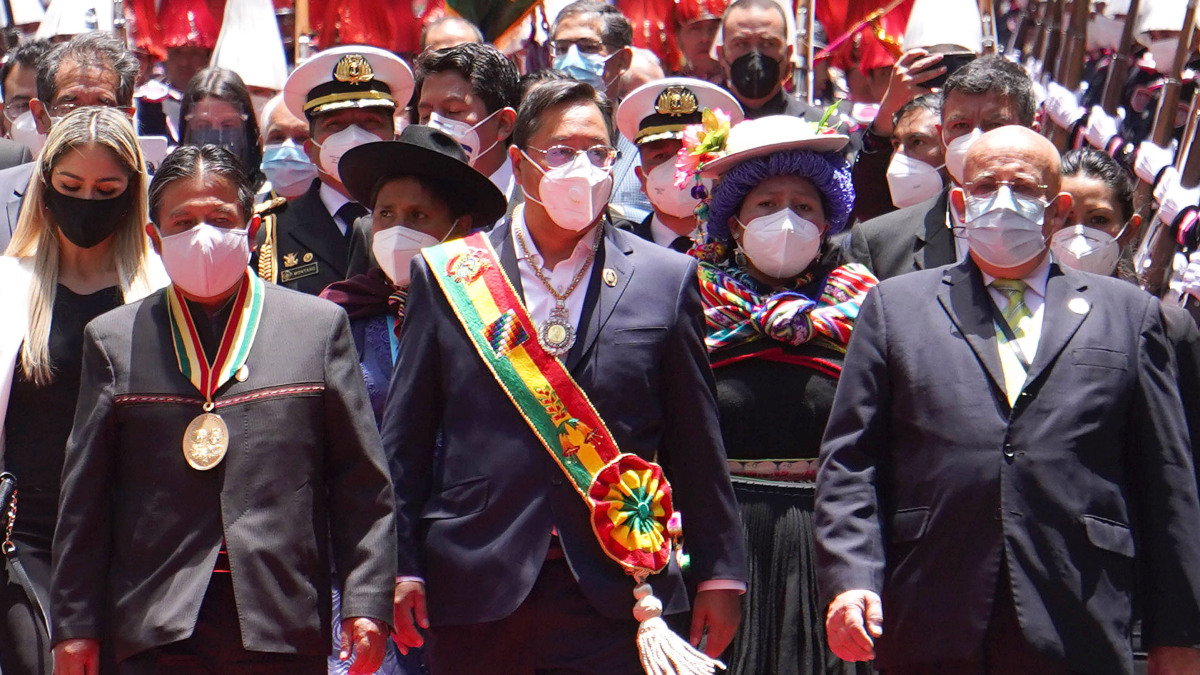 Communtarian-indigenous based Movement toward Socialism (MAS) returned to power in a landslide election victory, October 18, 2020, thus ousting the rightest coup government backed by the U.S. (1) This is some of first quarter developments?

Luis Arce, President Evo Morales’ (2006-2019) minister of economy and public finance, and David Choquehuanca, Morales’ foreign minister, won the presidency and vice-presidency with 55% of the vote (3.4 million). The closest opposition candidate was former conservative president Carlos Mesa (2003-5), with 28%, followed by rightest coup-maker Luis Fernando Camacho, with 14%. Coup dictator, Jeannie Áñez, dropped out of the campaign when polls showed her with a possible 8%.

MAS also regained control of both houses of parliament: 75 of 130 seats in the Chamber of Deputies, and 21 of 36 seats in the Senate—the Senate now has a female majority. MAS did not, however, accomplish a two-third majority as occurred during Morales tenure.

Áñez, a right-wing senator, assumed leadership of the coup when military leaders threatened to remove Evo Morales by force, in November 2019. He went into exile (first in Mexico, then Argentina), in order to avoid massive bloodshed, as he foresaw would occur had he stayed.

Within days of the coup, several pro-Morales protestors were shot to death by military soldiers and helicopter gunners. At least three dozen anti-coup activists, mostly indigenous people, were murdered during the year-long dictatorship.

Evo returned to his country the day after the new government was inaugurated, November 8. He told his people in the state of Cochabamba, “The transnationals do not forgive us for having nationalized our natural resources…Lithium is why the U.S. backed the coup.”

Morales resumed chairmanship of MAS but is not part of the new government.

Jeannie Áñez’s rule was marked by authoritarian assaults and a pattern of insults to Bolivia’s indigenous peoples. She called Ayamara’s celebrations “satanic”, which gave a helping hand to racists who burned indigenous peoples Wiphala flag, and to some militarists and police who murdered dozens of indigenous protestors.

Ten days following MAS’ election victory, the Chamber of Deputies and the Senate approved a final report on the “massacres of Senkata [and] Sacaba.” The report recommended that Añez be prosecuted for genocide and proposed criminal indictments of 11 of her ministers. Senate president Eva Copa specified that the report would be submitted to prosecutors for possible proceedings. 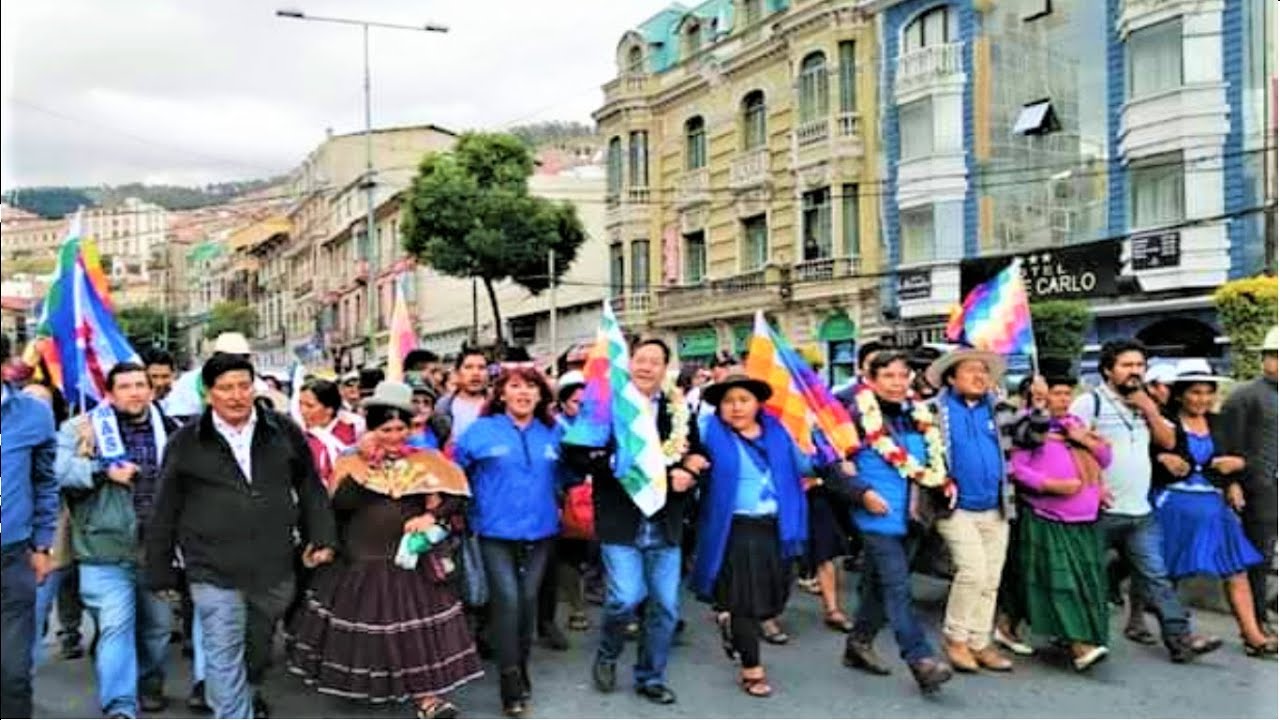 It is expected that Bolivia will once more champion much of the policies that made Evo Morales the most beloved leader in Bolivian history. According to the Council on Hemispheric Affairs, Morales ended the 500-years.

The Obama government cut off ambassadorial relations upon assuming the presidency in 2008. Morales subsequently expelled the Drug Enforcement Administration (DEA) and United States Agency of International Development Agency (USAID), which Morales accused of “seeking to conspire against the Bolivian people and his government.”

Bolivia’s coup government left the people with a foreign and domestic debt of 4.9 billion dollars. The coronavirus pandemic, and dictatorial rule—marked by regressive economic policy, cuts in taxes for the rich—is predicted to cause a 6% economic contraction World Bank forecasts for 2021.

Luis Arce was born in a middle class family of teachers. He got his university degrees in economy. Arce is not considered to be indigenous, and is seen as a moderate Marxist.

“I have had my ideas since I was 14 years old and I started reading Karl Marx. Since then I have not stopped having the same ideological position and I am not going to change for anything,” Arce told Reuters in an interview in October. In Evo's shadow, Bolivia's new president Luis Arce promises moderate socialism (msn.com)

Morales-Arce finance budgets included bonuses for pregnant women, school children, the elderly, and huge investments industrializing natural gas and lithium for batteries and nuclear physics. Now President, Arce has already reinstituted a new “Bonus against Hunger”, which will help over four million people. The beneficiaries are people over 18, who do not receive income from public or private institutions, people with disabilities, mothers, and those with the Universal Bonus. Bolivia: President Arce Approves Bonus Against Hunger | News | teleSUR English

Arce has promised not to cut public spending, though he acknowledges that some austerity measures will be needed. He also declared the “process of change [will be resumed] without hate, and learning and overcoming our errors as MAS.”

Half of all revenues still come from natural gas and oil. Agricultural production is second. Arce wishes to diversify the economy. He has stopped the exportation of food, in order to assure that all Bolivians are well fed. He has fixed the currency rate of exchange to curb inflation.

Vice-President David Choquehuanca, leader of the Confederación Sindical Única de Campesinos de Bolivia and the Movimiento Campesino Indígena, was born in 1961, in an Aymara community of La Paz. The former foreign minister learned to speak Spanish at the age of seven. During his years in Morales cabinet, he assumed the general secretariat of the Bolivarian Alliance for the Peoples of Our America (ALBA). Bolivia has returned to ALBA after Áñez had withdrawn from the cooperative-oriented alliance of eight Latin American countries. The state has also resumed diplomatic and fraternal relations with Iran, Venezuela, Cuba and Nicaragua leftist governments. Áñez had also expelled Cuba’s 700 doctors and medical workers.

Half the population is indigenous (some sources place the percentage even higher). In the beginning of the Morales presidency, a new constitution was created with grass roots participation. It recognizes 36 peoples as indigenous, and made three of their languages, along with Spanish, official languages of the nation. Quechua people make up half the indigenous population; Ayamara’s 41%.

Yet of the 17 ministers, only one is indigenous and four are women. Sabina Orellana, a Quechua union activist, was appointed Minister of Cultures, Decolonization and Depatriarchalization.

Ten days following assumption of the presidency, Arce fired military right-wingers loyal to the coup-makers and to the U.S. He replaced them with officers purportedly loyal to the people and the constitution.

Western mainstream media (MSM) have ignored most developments in Bolivia since the election other than some coverage about corona and floods. MSM puts Bolivia in bed with Russia, because it is supplying Sputnik V vaccine to Bolivia—one of 50 countries to buy this inexpensive vaccine. Russia to supply Algeria, Bolivia with Sputnik V vaccine | Coronavirus pandemic News | Al Jazeera

The government has also ordered Western made vaccines such as Astra Zeneca, which charges three times more than the Russian vaccine and is not very effective against the South African mutation.

At the beginning of February, 218,000 people had tested positive. The population is 11.5 million. Around 50 persons are dying daily. Evo Morales’ sister, Ester, died from the virus at age 70.

Fearing an economic collapse, Arce has not shut down as much business as many people desire. Health workers are upset. Hospitals are filled to near overflowing. Health workers in the most conservative Santa Cruz region conducted a partial 24-hour strike (February 2), demanding a greater lockdown of society, in order to prevent more spreading of the virus and its mutations. Médicos bolivianos hacen paro en región golpeada por COVID - Infobae

Many people also wish to postpone the planned regional and municipal elections scheduled for March 7. The government intends to maintain the date despite fears of more corona infections.

Notes:
1. MAS was founded by Evo Morales, in 1998, an outgrowth of coca farmers struggles to maintain the indigenous tradition of chewing its leaves (not cocaine) as a stimulant, especially used by chauffeurs. MAS’ struggles included the right to have free access to water, and to change the extreme greedy competitiveness of capitalism.

Communitarianism aspires to collective decision-making and a cooperative economy, connecting the individual with the community and rejecting laissez-faire policies. Some see this form of a visionary society as “utopian socialism”, or “socialism of the 21st century”. The thought is to avoid 18th, 19th, 20th century violent revolutions. Working class rule would be replaced with all citizens rule without capital/corporate rule. Direct voting at assemblies is the preferred manner to select leaders, who should not become permanent leaders.

Communitarianism is an outgrowth of the pan-hispanic liberation movement led by the Venezuelan military and political leader Simon Bolivar (1783-1830). Insurrections threw out Spanish colonial rule in Venezuela, Bolivia, Peru, Ecuador, and Colombia (Panama). The Gran Colombia was formed in 1821 under Bolívar's leadership. This federation included much of what is now Venezuela, Colombia, Panama and Ecuador. In 1824, he was named dictator of Peru, followed by the creation of Bolivia in 1825.