[This review is posted on vineyard and unz websites]

Ron Ridenour’s latest book (this is his 10th book on international relations and politics) takes a direct shot at one of the most prevailing myths in the western political discourse: the thesis that Russia and its USSR predecessor have been uniquely aggressive and generally bellicose states. At a time when rabid russophobia is the order of the day (again – chronic russophobia has been a regular feature of western political culture for many centuries now), this is a very timely and important book which I highly recommend to those interested in history. 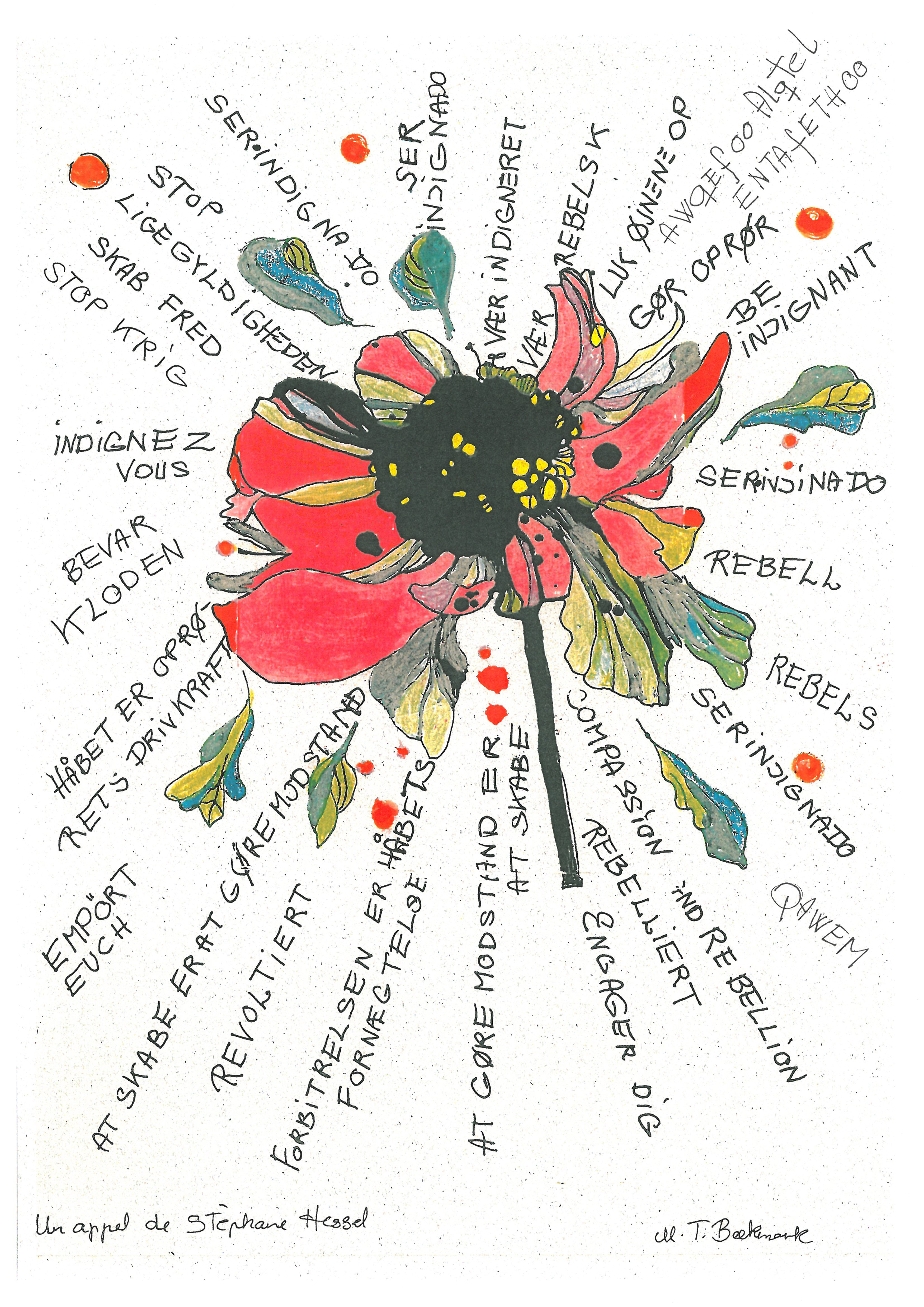 Collage by Jette Salling based on an appeal by Stephane Hessel:Rise!

The book is separated into three parts. In the first part of the book (The Great Capitalist Socialist Divide), Ridenour looks at the Cuban Missile Crisis in some detail and uses it to debunk the many myths which the “official” US historiography has been presenting as dogma for decades. In this first section, Ridenour also provides many fascinating details about Captain Vasili Arkhipov “the man who prevented WWIII”. He also recounts how the US propaganda machine tried, and still tries, to blame the murder of JFK on the Russians. The second part of the book (Peace, Land, Bread) goes back in history and looks into the ideological and political struggle between the collective West and the Soviet Union from the revolution of 1917 and well into the Cold War. The third part of the book (Russia At the Crossroads – the Putin Era) conclude with very recent events, including the western backed coup d’etat in the Ukraine and the Russian intervention in Syria.

The first and the third parts of the book are extremely well researched and offer a rock-solid, fact-based, and logical analysis of the Cuban Missile Crisis and its modern equivalent, the AngloZionist “crusade” against modern Russia. This is a very important and good choice because the two crises have a lot in common. I would even argue that the current crisis is much more dangerous than the Cuban Missile Crisis because of the extremely low personal and intellectual qualities of the current US ruling elites. Ridenour shows that in 1962 it was not the Soviets, but the US which pushed the world to the edge of a nuclear war, and in the third section of his book he shows how, yet again, the Empire is cornering Russia into a situation which very much risks resulting in a nuclear conflict.

For those who would have a knee-jerk rejection of Ridenour’s crimethink, the book, on page 438-444, offers a list of governments the USA has overthrown since WWII (50), countries which the USA has bombed (30), foreign leaders it has murdered (50+), suppressed populist/nationalist movements (20), and subverted democratic elections (30). Ridenour then asks how it is that with a tally like that the US gets to moralize about Russia. He is absolutely right, of course. Compared to the USA, the Soviet Union was a peace-loving, non-interventionist and generally international law respecting country. Oh sure, the USSR had its share of horrors and evil deeds, but compared with the “land of the free and the home of the brave” these are minor, almost petty, transgressions.

The book is not without its faults. Sadly, in the second part of his book Ridenour repeats what I can only call the “standard list of western clichés” about the 1917 Revolution, it’s causes and effects. Truth be told, Ridenour is most certainly not to be singled out for making such a mistake: most of the books written in English and many of those written in Russian about this period of Russian history are basically worthless because they are all written by folks (from all sides of the political spectrum) with a vested ideological interest in presenting a completely counter-factual chronology of what actually took place (Russian author Ivan Solonevich wrote at length about this phenomenon in his books). Furthermore, such a process is inevitable: after decades of over-the-top demonization of everything and anything Soviet, there is now a “return of the pendulum” (both in Russia and outside) to whitewash the Soviet regime and explain away all its crimes and atrocities (of which there were plenty). For these reasons I would recommend that readers skip chapter 7 entirely (the description of the 1905 and 1917 revolutions are particularly bad and sound like a rehash of Soviet propaganda clichés of the early 1980s).

The book’s afterworld begins with the following words “WAITING AND WAITING! Waiting for the end of the world! Waiting for Godot! Although, unlike in Samuel Beckett’s Theater of the Absurd play, in which Godot never arrives, the mad men and mad women leaders of the US, France and UK (and Israel) are bringing us their bombs”. Having been warning about the very risks of war for at least 4 years now, and having, along with others, posted a special “Russian Warning” to warn about this danger, I can only wholeheartedly welcome the publication of an entire book aimed at averting such a cataclysmic outcome.

My other big regret with this book is that it does not have an index. This is particularly frustrating since the book is packed with over 500 pages of very interesting information and can be used as a very good reference book.

Still, these criticisms should not distract from the very real value of this book. One of the most frightening phenomena today is that the Empire and Russia are currently headed directly for war and that, unlike what took place during the Cuban Missile Crisis, almost nobody today speaks about this. The western corporate media is especially guilty in this regard, as it encourages a constant escalation of rabid anti-Russian rhetoric (and actions) without ever mentioning that if brought to its logical conclusion such policies will result in a devastating war which the West cannot win (neither can Russia, of course, but that is hardly much of a consolation, is it?)

There have been courageous voices in the West trying to stop this crazy slide towards a nuclear apocalypse (I especially think of Professor Stephen Cohen and Paul Craig Roberts) but theirs were truly “cries in the wilderness”. And it doesn’t matter one bit whether somebody identifies himself as a conservative, liberal, progressive, libertarian, socialist, anarcho-capitalist or by another other (mostly meaningless) political label. What matters is as simple as it is crucial: preventing the Neocons from triggering a war with Russia or with China, or with Iran, or with the DPRK, or with Venezuela, or with… (fill in the blank). The list of countries the US is in conflict with is very long (just remember Nikki Haley berating and threatening the entire UN General Assembly because the vast majority of its members dared to disagree with the US position on Jerusalem), but Russia is (yet again) the designated arch-villian, the Evil Empire, Mordor – you name it! Russia is the country which wants to murder everybody with poison gas, from the Skripals in the UK, to the innocent children of Syria. Russia is the country which shoots down airliners and prepares to invade all her western neighbors.

Finally, Russia is the place which hacks every computer in the “Free World” and interferes with every single election. The longer that list of idiotic accusations stretches, the bigger the risk of war becomes, because words have their weight and you cannot have normal, civilized relations with the Evil Empire of Mordor which is “highly likely” to invade, nuke or otherwise subvert the peace-loving peoples of the West.

Except that there never was any such thing as a “peace loving West” – that is truly a self-serving and 100% false myth. The historical record shows that in reality the collective West has engaged in a 1000 year long murderous rampage all over the planet and that each time it designated its victim as the culprit and itself as the defender of lofty ideals. Ridenour’s The Russian Peace Threat: Pentagon on Alert(alongside with Guy Mettan’s “Creating Russophobia: From the Great Religious Schism to Anti-Putin Hysteria”, whose original French edition I reviewed here) does a long way towards debunking this myth.

With the few caveats mentioned above, I highly recommend this book.