The greatest action ever for the protection of Mother Earth took place in 166 countries, September 21. We were half-a-million people filling streets in some 3000 events (a few, the day before).

Three hundred thousand marched in New York City, the city where some 125 heads of states were to meet on September 23. Among many celebrities and politicians participating was UN Secretary General Ban Ki-moon. He had called for the UN summit, the first in which so many heads of state were to attend since the COP15 fiasco held in Copenhagen, December 2009. At that time 100,000 people marched demanding that the politicians do something significant. That had been the largest action until now. Since that time nothing of consequence has been forthcoming from the politicians and the corporations that damage our lives and the planet.

Here, as elsewhere, most signs were handmade. Among the messages were:
“There is no Planet B”, “Climate Justice” “Communities before corporations”,
“Kapitalen Kræver Klima Katastrofer” (Capital demands climate catastrophes),
“Krigen gøder/jorden bløder” (War fertilizers/earth bleeds). 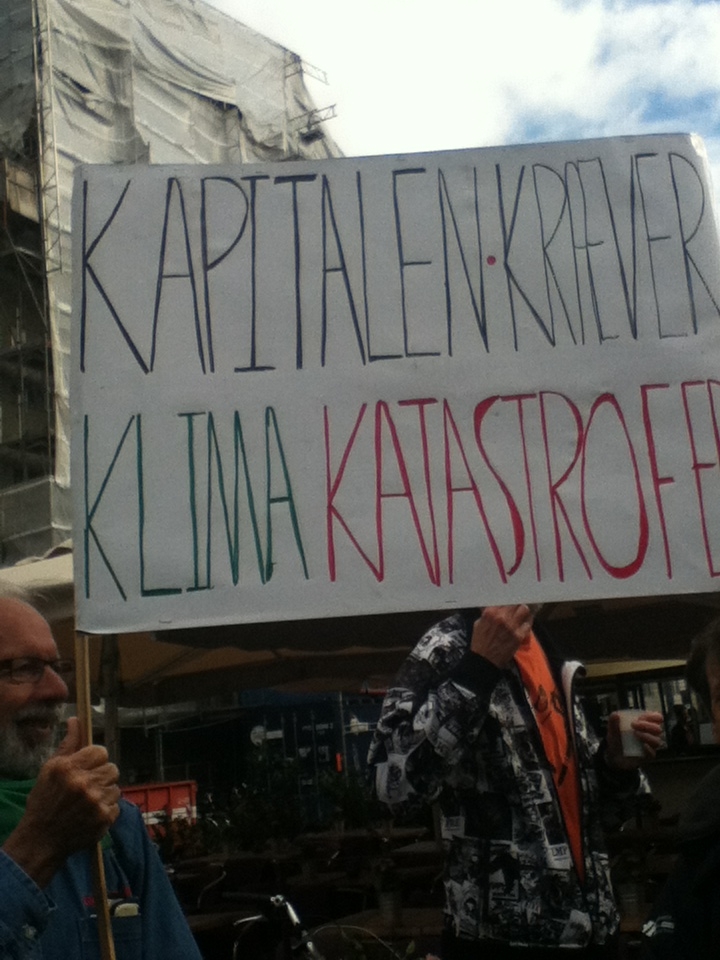 Photo of the writer with sign by Christel Mayland

Among the speakers were the winners of WWF’s 2013 writing contest concerning climate change. The three female university students, Hald-Busch-Jensen, wrote their statement for political leaders.

“We are scared; scared that you, our leaders, only hold your own short-term agenda in mind, and do not consider which consequences your actions may have. We stand on the sideline, puzzled, when the leaders of the world hesitate to do what is necessary, to reach a sustainable basis for life.

We have a distinct appeal to you. You have to act, so your grandchildren also get the possibility to enjoy clean water, breath clean air and walk in the wild nature.

We all agree, that the path we are following now, will lead to a dead end. So we ask you to use the analyses, action plans and reports. Science is useless, if it is not followed by political will.

We want you to live up to your responsibility, as a real leader must do – do this for us, and the generations to come.”
http://www.wwf.dk/succeser/gift_to_the_earth/vindertale.cfm

Mickey Gjerris, a theologian and member of the Danish Ethical Council, was among the speakers. He emphasized that while he was non-violent, as was the demonstration, he believed that it time to throw stones, metaphorically.

H e urged corporations and politicians to put their houses in order; he also sought to stoke the fire in each of our hearths.

“We are all responsible. Most of us, however, are hypocritical in our actions or, rather, inactions. We live no impact lives. It is time to change ourselves.”

Gjerris reminded me of the Danish theologian K.E. Løstrup whose most important work, “The Ethical Demand”, outlines how we are in one another’s hands. These Nordic theologian philosophers are akin to the German Martin Niemöller who meant that we must act in solidarity with all oppressed peoples. (http://www.ushmm.org/wlc/en/article.php?ModuleId=10007392 ). If we lived thusly our Mother Earth would not be suffering as it is, nor would we have the wars and avaricious economy that we live under today.

A new economic system and an end to wars is necessary

About one-third of the more than 1000 organizations involved in the climate actions around the world agreed to sign a declaration, on September 16. It is, in my view, the most powerful and important statement to date concerning what must be done and not done about climate change. Among the better known groups are: La Via Campesina, ATTAC (France), and Global Justice Alliance (US). The essence of this statement was inspired, in part, by the world conference held in April, 2010, in Bolivia. It was called together by President Evo Morales following the disaster in Copenhagen the previous December. Here are extracts, including their 10-point program.

“The [climate] Summit has been surrounded by a lot of fanfare but proposes voluntary pledges for emission cuts, market-based and destructive public-private partnership initiatives such as REDD+, Climate-Smart Agriculture and the Sustainable Energy for All Initiative. These are all false solutions of the green economy that seeks to further commodify life and nature and further capitalist profit. The undersigned social movements that all together represent more than 200 million people around the world denounce this corporate take over of the UN and the climate negotiations process and call for a deep systemic change.” http://viacampesina.org/en/index.php/actions-and-events-mainmenu-26/-climate-change-and-agrofuels-mainmenu-75/1664-invitation-to-sign-on-statement-to-denounce-corporate-takeover-of-climate-summit

“Climate change is the result of an unjust economic system and to deal with the crisis, we must address the root causes and change the system. There will be no going back from the climate chaos if we do not fight for real solutions and do nothing to confront and challenge the inaction of our governments’ policy-making being hijacked by polluting corporations. It is crucial for us to unify and strengthen our economic, social and environmental struggles and focus our energies on changing the capitalist system.”

“Scientists have clearly traced the problem of increasing greenhouse gas emissions back to the industrial revolution 250 years ago while tracking the spurt that has taken place during the past century. From this analysis, it is clear that the industrial model of increased extraction and productivism for the profit of a few is the prime cause of the problem. We need to replace capitalism with a new system that seeks harmony between humans and nature and not an endless growth model that the capitalist system promotes in order to make more and more profit. We need a system that links climate change and human rights and provides for the protection of most vulnerable communities like migrants, and recognizes the rights of Indigenous peoples.

“Mother Earth and her natural resources cannot sustain the consumption and production needs of this globalized modern industrialized society. We require a new system that addresses the needs of the majority and not of the few. To move in this direction, we need a redistribution of the wealth that is now controlled by the 1%. In turn, this requires a new definition of wellbeing and prosperity for all life on the planet under the limits and in recognition of the rights of our Mother Earth and Nature.”

Mobilize and organize to Stop and Prevent Planet Fever!

Make immediate binding commitments — not voluntary pledges — to control planetary temperature rise to no more than 1.5ºC [2.7 ºF] this century by reducing global greenhouse gas emissions per year to 38 Gigatons by 2020.

Let the Earth rest by making binding commitments to leave more than 80% of known fossil fuel reserves under the soil and beneath the ocean floor.

Move away from resource extractivism by placing bans on all new exploration and exploitation of oil, bitumen sands, oil shale, coal, uranium, and natural gas including pipeline infrastructure like Keystone XL.

Accelerate the development and transition to renewable energy alternatives such as wind, solar, geothermal and tidal power with more public and community ownership and control.

Promote local production and consumption of durable goods to satisfy the fundamental needs of the people and avoid the transport of goods that can be produced locally.

Stimulate the transition from industrialized, export-oriented agriculture for the global supermarket to community-based production to meet local food needs based on food sovereignty.

Adopt and apply Zero Waste strategies for the recycling and disposal of trash and the retrofitting of buildings to conserve energy for heating and cooling.

Improve and expand public transportation for moving people and freight within urban centres and between cities within urban regions through efficient trains.

Develop new sectors of the economy designed to create new jobs that restore the balance and equilibrium of the Earth system such as climate jobs to reduce greenhouse gas emissions and Earth restoration jobs.