My contract ran out after four years at Editorial José Martí. The director and I were at odds over the publishing house’s failure to produce or distribute many scheduled books, including mine. The Special Period led to the house cutting back and then shutting down. My two books translated into Spanish were not getting printed. I decided to sail to Europe on a Cuban container ship and hold solidarity talks and sell my book, “Backfire”. Later, I’d return to another job.

It took a lot of insistence but I final obtained the high level approval necessary to travel abroad on a Cuban ship. Cuba does not have passenger ships. I was assigned to the Giorita. It was an eventful month-long trip across the Atlantic. You can find out more about this by reading “Cuba at Sea”, which is on my website and sold online.

While on tour in England, I attended a publishers’ book launching in London where I met Jon Lee Anderson. He had recently signed a contract to do the “definitive” Che book (“Che Guevara: A Revolutionary Life”). Jon was not a revolutionary but he was a thorough researcher-interviewer and had admired Che in his youth.

After sailing back to Cuba on another Cuban container ship, “Rose Island”, a couple months later, I met Jon again, and his family. They lived in Cuba for three years while Jon worked on the book. He had unique access to Aleida March, Che’s widow, and to many government archives. Jon and I spoke a lot about Che, the Cuban revolution, where Cuba was heading and other worldly matter.

When Jon’s book came out in early 1996, I wrote a favorable review in English and in Spanish. Some solidarity activists with Cuba did not like the book. I suppose because it was too “objective”. I later met Aleida again and asked her opinion. She was disappointed with Jon for not having taken up Che’s economics seriously enough and for having revealed too many intimate aspects of his life. The intimacy was necessary, I thought, to show the real person. I agreed that there was too little about the economics but still it is the most thorough book of the many on Che’s life. I quote from the epilogue to give a taste of the conclusion Jon came to.

“Che’s unshakable faith in his belief was made even more powerful by his unusual combination of romantic passion and coldly analytical thought. This paradoxical blend was probably the secret to the near-mystical stature he acquired, but seems also to have been the source of his inherent weaknesses—hubris and naïveté—he consistently failed to understand how to alter the fundamental nature of others and get them to become `selfless Communists´. But along with his mistakes, what is most remembered about Che is his personal example, embodying faith, willpower, and sacrifice.

As the veteran Cuban intelligence official `Santiago´ observed recently:
`Toward the end, Che knew what was coming, and he prepared himself for an exemplary death. He knew his death would become an example in the cause of Latin American revolution, and he was right. We would have preferred him to remain alive, with us here in Cuba, but the truth is that his death helped us tremendously. It’s unlikely we would have had all the revolutionary solidarity we have had over the years if it weren’t for Che dying the way he did.´”

I agree with both Jon and “Santiago’s” assessment of Che and his significance for Cuba and revolution generally. I excerpt from my review of Anderson’s book.

Three decades after the murder of the legendary revolutionary Che Guevara, not one country is guided by the martyr’s social ideals or economic theories, yet his legend grows.

“Marxist guerrillas in Asia, Africa and Latin America, who were anxious to revolutionize their societies, held his banner aloft as they went into battle. And, as the youth in the United States and Western Europe rose up against the established order over the Vietnam War, racial prejudice, and social orthodoxy, Che’s defiant visage became the ultimate icon of their fervent if largely futile revolt,’” writes Anderson.

The author reveals that Che, not Raúl Castro as believed, played the main role in bringing [Cuba and the Soviet Union] together. Yet Che became the first of Cuba’s leaders to openly criticize the direction that the Soviet revolution had taken, which was also guiding Cuba toward making some of the same state-elitist and bureaucratic mistakes.

Cuban “spymaster and keeper of its secrets” Manuel Pineiro Losada—Red Beard—gave his first interview to an author…it was Guevara who stood behind the “exportation of revolution”. Pineiro said that Che encouraged Nicaraguans and Guatemalans, Peruvians, Venezuelans, Argentines and others to take up armed struggle.

He foresaw creating the “new man” --an individual not motivated by power or greed and material objects but by ideals that would lead one to consciously sacrifice for society.

This biography of “the most complete human being of our age,” as Jean-Paul Sartre said of Guevara, was made possible because Che’s widow and state leaders believed that the time was right to bring it out and that Anderson possessed the personal integrity to treat him honestly. (1)

Not only did Jon treat Che honestly but he put his meaning in perspective for history, and added to my understanding. The essence of that was well put in an interview with Jon.

“What makes Che so fascinating to me is that he was unusually a man for his time. There was something that happened in the post-war world and especially for a brief time in the 60s which Che is now indistinguishable in our minds from—and that’s right and as it should be because Che saw that at that very moment the world was in an optimum state to be revolutionized. It didn’t work out, but it was possible. He was right, and he went for it.”

“He was inspired by a strong sense of indignation about what he saw around him. I think there were mistakes made in the end in Bolivia, but he wasn’t wrong in the idea that it could be the locus for a continental revolution, and he wasn’t wrong in assuming that Argentina could fall, or that Bolivia could fall. Evo Morales is in power now…” (2).

Che had founded Prensa Latina (PL), which hired me when I returned to Cuba, in early 1993. I was to translate and write features and other articles for Latin America’s largest news agency. An Argentine journalist friend of Che’s, Jorge Ricardo Masetti, was PL’s first director. He got well known foreign writers to contribute. Among them were: Jean-Paul Sartre, Charles Wright Mills, Waldo Frank, and Gabriel García Márquez. 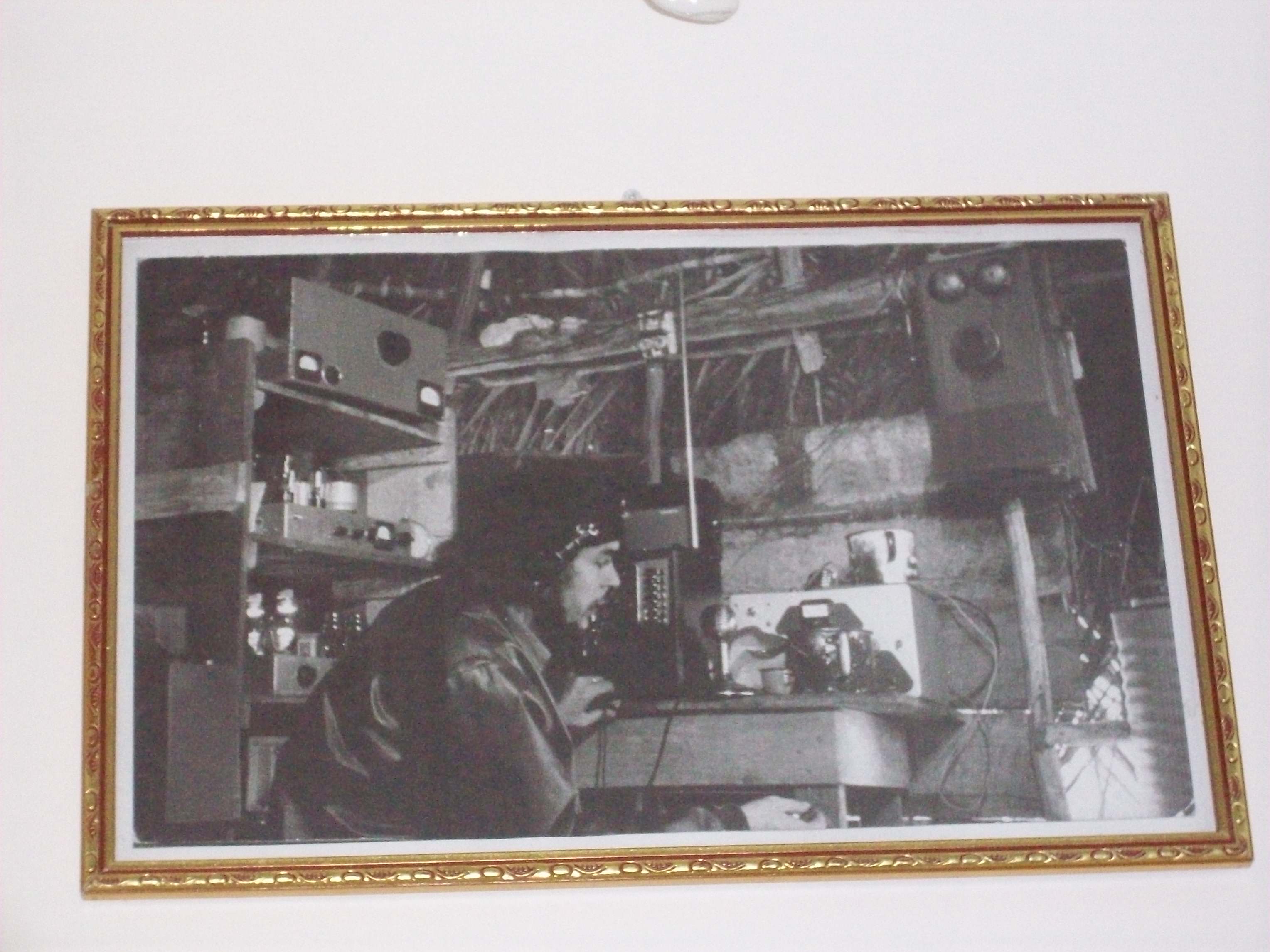 Che operating the guerrilla based Radio Rebelde, which is a major station today

It was a privilege to work for Prensa Latina, especially being the only “Yankee”.
I wrote on many themes, most of which I chose: from culture to archeological finds, from interviews with Cuban philosophers to solidarity activism. However it was
difficult to write about Cuban politics and economy, nearly impossible in fact,
if one wished to be forthright and analytical.

During the three years I worked there, several story ideas I proposed were turned down: notions about how the economy actually works, how workers do or do not make real decisions, and the criminal case of Robert Lee Vesco, a notorious fugitive financier. The director was a decent guy and a competent journalist but he told me that he would be in trouble if he allowed publication of such pieces. He wouldn’t bring the ideas further up the line either for fear that simply proposing them would reflect badly upon him.

I had experienced censorship in the US, Great Brittan and Denmark’s MSM, the so-called heartlands of free press and democracy. Nevertheless, it was disturbing that censorship was a routine element of Cuban policy, especially so because without adequate information and exchange of ideas the population cannot have a real opportunity to shape policy.

In the last period in Cuba, I engaged in an act of solidarity with my inspirer. Through my contacts as “Morning Star’s” correspondent, I learned of an enterprise in England to commercialize a “Che Fruta” beer. A young admirer of Che’s came up with the idea for a “solidarity” beer. It would be brewed and bottled in Cuba and sold abroad as a joint venture.

Various media were mocking the hypocrisy. Firstly, Che did not drink beer. It agitated his asthma. Secondly, he would have croaked at the notion that the country he loved most would be commercializing his name.

I don’t know if it was due to my efforts, but I got this information to top officials who castigated lower echelon people who were cooperating with the enterprise, and it got stopped. Since then, however, hundreds of products are sold (even in Cuba) using Che’s name and face. Many consumers don’t even know anything about “the pop star”.

Had my consciousness not bothered me so much, I could have worked for PL forever and had a great time in Cuba. But it felt exceptionally painful living in a nation whose government declared it was driven by Marxist-Leninist principles, yet one could not be a Marxist activist. I did not return to live there after I took a leave, in spring 1996, to attend my brother’s funeral in the US and then visit my wife in Denmark, and her newly born grandchildren. I can’t say that I was better off living in capitalist Denmark. In those Cuban years, I had often felt useful writng and working voluntarily. In Denmark, I am nobody and there is no hope for socialism or anything radical.