New Youth House Movement, its hard core—old crew—and supporters marched alongside Christiania hippies and supporters through Copenhagen on March 31. Ten thousand Danes from across the land took to the streets, from toddlers to gray panthers, the abnormal and the normal, clowns, anarchists, communists, socialists, and no-ists, all with one message: We demand free space for everyone who refuses to join the commercialized dullness of mainstream society.

Thirty years ago, squatters took over an unused part of Denmark’s naval base just outside central Copenhagen. Homeless and radical youths sought a home and free place for the “abnormal”. They built a residential community with cultural, gastronomic and productive centers for everyone. They successfully fought eviction and untold police raids to become one of Europe’s few liberated territories. Finally, the government granted them “legality”. Then came the current warring government, which acts to strangle them, to “normalize” Christiania for the well-to-do.

Twenty-five years ago, Copenhagen city caved in to like-minded youths in another part of the city (Norrebro) and gave usufruct rights to youths to live in and run Youth House at Jagtvej 69. Built in 1897 for working class activities, it was named People’s House. In 1910, Clara Zetkin and other radical women declared March 8 International Women’s Day from this house. Lenin, Luxemburg, Liebknecht agitated for worker’s power from here.

On March 5-6, the Father’s House sect, which had bought the property from the city five years ago in violation of the city’s signed promise that it would not be sold, hired scab labor and demolished the house under heavy police guard. 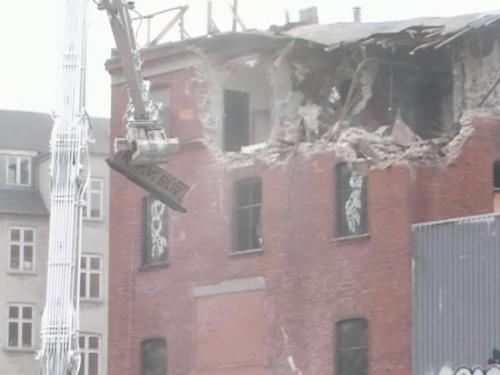 Every since then, many thousands of Danes and supporters from a score of European lands (even some New Yorkers) have taken to the streets to protest the eviction and demand new free places for Danes and other nationalities. Hundreds of Germans, Swedes and other peoples have been arrested for protesting at Danish government offices.

In Copenhagen, punk-anarchistic-autonom youths conduct daily informational and agitational activities: unannounced demonstrations (any kind of demonstration must be announced and applied for in this democratic Scandinavian country), happenings, marches, parades, daily leafleting, circulating petitions for a new house, letters to city government, even squatting at City Hall square. (See: www.jagtvej69.dk)

In one such “noise-making” demonstration last week, we marched 800 strong to West Jail to encourage comrades remanded in isolation. The day before, about 100 had been prevented from reaching the jail because they had defied the application law. The next day, the rebellious youth decided to make an exception to their principle not to advise the police beforehand of their actions.

“We march to support the prisoners and demand an autonomous house. We are angry. Today we must reach the prison and let the captives hear our voices of support,” Soeren explained over the loud-speaker.

So it was clear to all that this was not an occasion for throwing missiles at The Establishment’s police force. Thus it unfolded during the two-hour march through residential streets: constant chants, political-punk music from the loud-speaker truck, and short speeches aimed at explaining what we were doing to neighbors who looked out from windows and doorways.

“We will not disappear. You must give us our house. You make wars and smash our houses,” a 15 year-old girl shouted over the megaphone, and the marchers chanted:

These anarchistic youths make more lively demonstrations, are better organized and have greater respect for those they choose to represent them than most other left-wing groups and political parties. It has to do with forging participatory democracy. Youth House users have always made decisions collectively and in consensus. In their struggles, pacifists, self-defenders and users of property violence cooperate.

When we reached our destination, with two hundred police and a score of paddy wagons following us, we clapped hands, whistled, sang and listened to live bands, which played for the prisoners. They could hear us from top floors of the prison and blinked cell light bulbs in acknowledgement.

Many in the assembly had been among the 852 arrested in the first three weeks of March, the largest number of arrests for one issue since Nazi times in Denmark. Two-hundred had been remanded when brought before preliminary hearings within 24 hours upon arrest. Judges rubber-stamped police “evidence” of crimes: resisting arrest, assault, vandalism, disturbing the peace.

In this democratic society, police are allowed to jail arrestees without bail before they are tried simply by claiming they are guilty. If the preliminary judge believes the police reports, with or without hard evidence, the arrestee can be remanded while awaiting trial for an unspecified period of time. Some people have spent more than a year under remand.

According to police judgment, prisoners receive no letters for the first week, no visits for weeks or months, one book a week, perhaps one phone call a week, other than to acquire a lawyer. They are alone in a small cell with no toilet. There is a sink, a table, chair, one bunk bed, and usually a small window. Police contend isolation is necessary, in order to prevent the arrestee from adversely influencing criminal investigations.

Most of the 200 remanded spent one to four weeks under such conditions before being released pending trials. Last week, the remaining 15 in jail, including a youth under18 years, had their jail time extended an additional four weeks. They will serve eight weeks in isolation, at least, with one hour daily to walk about in an enclosed outdoor area, before they are tried. In many cases, the jail sentence, if found guilty, will be less than time spent in remand.

City and State politicians and their police claim that it was The Youth who conducted all the violence. Dust bins, private cars and bicycles were used as barricades against police rushes. This happened after police made many random arrests, often followed or preceded by beatings with billy clubs. The Establishment stole and then destroyed their cultural center, their identity. They were angry and fought back. What politicians and police, and most of the media, fail to make amends for is the rampant police violence and their violations of basic civil rights.

Many of the youths this observer-activist spoke with told of how they were repeatedly clubbed by uniformed police and sometimes by civilian-clothed police using their fists. For example, Henrik Poulsen, 17 years old, was severely beaten by civilian police. This was observed by several neighbors and two elderly women passing by. When they yelled at the police to stop they were told to “piss off”.

On the way to jail, the police hit Henrik several times and threatened to take him on a “bog tour”. He was charged with breaking a window and released the next day. Only then did he see a doctor at emergency hospital. He had a broken nose, and many bruises and lesions.

The police themselves broke into 11 residences and community houses, on March 3, breaking down doors and arresting everyone inside on the pretext of “searching foreigners who disturb the peace”. Police raided Baldersgade collective firing tear gas through windows and breaking down doors. They didn’t knock or ask to come inside, despite the fact that they had no warrant, something which their new terror law allows, and then arrested all 40 persons sleeping there.

At International Forum, a progressive bookstore and solidarity info-action group for Latin American and the Middle East, police broke two doors and arrested all 20 inside. For that day, the police netted 130 arrests, almost all of whom were soon released without charges.

Many of the smashed windows in Norrebro were not broken by The Youth. I spoke with three small businessmen who were certain that their windows were broken by “bullies or neo-nazis”. In fact, the local small business association supports The Youth and their house, and has petitioned the city to pay for damage done to their windows. In the case of a local bicycle store, the owner caught the window breaker and discovered that he was a neo-nazi.

Immediately after the destruction of Youth House, activists set up a large, decorated, white tent on City Hall square.

“You took our house.
Now we take the streets.
We stay until we get a house.” 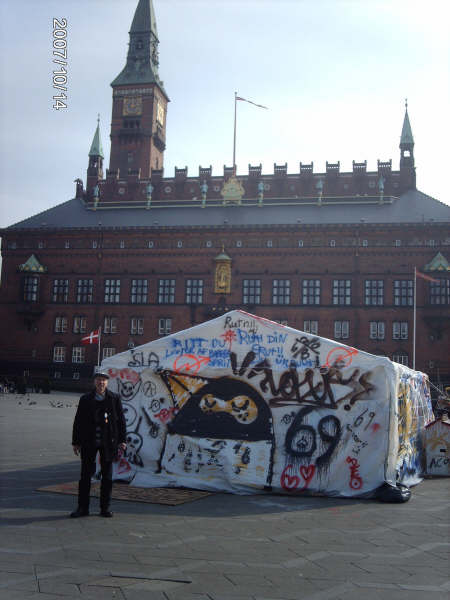 Janne is on duty inside the spacious tent. She stands in a circle with several activists and visitors. They go over the rules for tent users: No violence. No drugs. No sexist discrimination. No veggie authoritarianism. Everyone treated as one self wants to be.

Janne, Tipp, Geo and I walk to a local cafe, which supports the squatters every evening with the food left over that day.

“We set up the tent to continue our protest for a new house as good as ours they destroyed and under our autonomous conditions,” the 33-year old activist says with a determined smile.

Janne is still a squatter activist, side-by-side with her teen-age daughter. Her husband, a mason, watches over their other daughter while Janne is family-designated to be a full-time activist.

“It’s natural to be free, to be different, to fight for a better world. I started by squatting another house, in 1984, when I was 13. When we lost that one some of took up at Youth House. So, I’ve been through it all.

“We didn’t ask for any permit to camp out 24-hours a day, to pass out our literature, to talk to hundreds of passer-byers every day. The authorities said we have to have a permit. So, we said, give us one. Well, we have to fill out paper. You fill it out, we said. In a week’s time, with the police threatening to remove us by force yet hesitating to do so—we are, after all, on the Tonight Show every evening shouting our slogans, holding our banners at the live TV performance.

“Then a City Hall committee man came out and gave us the permission with all our requisites,” she said, showing me the permit.

Geo is the 17 year-old sister of Patti, 13, who was roughly arrested and held away from her mother’s care once she was arrested. Patti was threatened with being taken from her mother and sent to foster care. Their mother was charged with “disturbing the peace” and released a day later pending trial.

But all three females are optimistic.

“We will win,” Janne asserted. “We make actions everyday. Our word gets around a lot. We expect it’ll take some years, maybe sometime after the next elections. With a new government, we’ll press them again massively. The city admits it reneged on an earlier government’s agreement with us that they would not sell the house, but, they say, that’s history. Their lies and treachery will catch up with them. We’ll stay and fight until we get our house.”

The Youth also recognize that they missed some popular sympathy due to the burning of cars and cycles. Worst of all, thousands of books and computers were burned at a local high school.

“We didn’t do that. We know who did it; they told us,” Janne says, lamentably.

“Yeah, many don’t know that and sympathy has dwindled. But it’ll come back.

“We wish our neighbors, who lost vehicles and don’t have insurance coverage, to apply to us to receive funding for a replacement. We have a good drive already and anyone can support by sending money to:

In fact, The Youth House struggle is so popular that a daily newspaper reported that it was the most popular nursery school game today, and almost every kid wants to play the cool street running anarchist-autonoms.

Another struggle is for their soul-fellows at Christiania.

“We have the collective fight to save Christiania, and most Danes agree it should remain. The government is planning to `normalize’ and thus destroy that wonderful free place,” Janne says.

In the upcoming weeks, there will be a myriad of actions. On May Day, the City Hall will witness an anti-fascist manifestation jointly led by The New Youth House movement and gray panthers.