Youth House, one of Denmark’s most historically significant buildings, was torn down by unorganized, masked and hooded workers, operating under heavy police protection, on March 5. 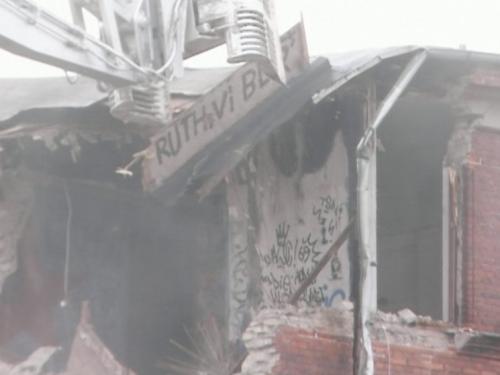 A people's house for over a century smashed in minutes. (Foto Tippø.)

This is the most radical clash of social sectors in Denmark’s modern history. It is about The Establishment’s desire to eliminate all challenges to the rule of private property and profit-making. It is a classic example of “which side are you on”?

A private foundation comprised of several local unions and progressives had tried to save the historic building by offering to buy it back from the fundamentalist group.

Byggefag Samvirke (Construction Workers Association of unions) refused to work under police protection and protested the destruction. But the sect of about 100 members hired non-unionists to do the lord’s work. The police did not allow any media or on-lookers within sight of the destroyers, nor did they allow union representatives to inspect the site.

In a light but steady rain, a group of from 200 to 500 people gathered as close as the police would allow. They watched sadly, singing and chanting, crying and hugging. Although the action was peaceful, police arrested a few activists.

A young demonstrator, Kasper, expressed what many felt: “This was our second home and our rehearsal location, one of the best in the city. It’s like watching your daughter being raped.”

Another demonstrator said: “There has been tons of tear gas in the air for three days but most tears are shed today.”

On March 1, with the mayor on a ski vacation, Denmark’s anti-terror squad was used for the first time. It seized the Youth House with huge cranes and a helicopter at 07:00. As some policemen landed on the roof, another group physically removed a “peace guard” of parents and neighbours standing before the house.

Police cut through windows, sprayed foam around and arrested all 36 youths inside, half of whom are foreigners. They have all been remanded for being “in possession” of missiles, which police suspected would be used against them.

In the four-day period of angry reactions (March 1-4), nearly 700 people were arrested, the largest mass arrests since Nazi occupation. One hundred-forty arrested came in support from a dozen countries. At times, anyone within reach was arrested, including a group of Legal Aide people. One night, police arrested 130 people in their homes around Youth House.
A large squad of police tried to entrap demonstrators by hiding in a cemetery. Many activists and bystanders were beaten with truncheons. Dogs and massive amounts of tear gas were used. A few people were run down by police vehicles. One was seen on television. Quite coincidentally, no serious injuries occurred.

About 250 of those arrested have been remanded by judges, who rubber stamped police requests for holding them in isolation custody without bail for two to four weeks, awaiting trials. They are charged with use of violence against policemen and vandalism.

“Politiken” a liberal daily estimated that the police action and subsequent “clean-up” has cost the city 14 million kroner (1.1 million pounds). Half of that went to wages and overtime for 600 police. Some is for repairs of a few of their heavy Holland Trucks. Police also loaned 36 more from Holland and Sweden.

An estimated 3.5 million kroner was used in the physical cleaning of the streets, to replace dustbins burned. The burning of about 40 private cars, and books and computers in a high school caused damages of about 4 million kroner [and] was most unpopular.

The Youth, as these autonom-anarchist-punk rockers are often referred to, set up a media group. Jan told this reporter that on principle not to split one another they will not comment negatively on actions. He added that the burning at the high school was not done by The Youth. These burnings were “regretful”, a frustrated expression of “extreme anger”.

When built in 1897, the building was constructed for workers activities and People’s House. It later became known as Workers Assembly Hall. National and internationally renowned spokespersons for workers rights and power spoke here. Among them were Lenin, Rosa Luxemburg, Karl Liebknecht and Clara Zetkin.

At an international conference of socialist women held there on August 26-7, 1910, 99 women from 17 countries declared March 8 as International Women’s Day. From 1911 onward, that day has marked women’s rights and struggles. In 1975, the UN declared that day as Women’s Day, too.
Clara Zetkin was a leader of that struggle and spoke at that meeting. She became the first Communist parliamentarian in Germany. A Danish woman, Nina Bang, who participated at People’s House and that conference, became the world’s first woman minister.

The house was used for working class activities until 1960. It went unused from 1960 until 1982 when the city turned it over to “users of Youth House”. Radical youth were clamouring for a place to practice their alternative culture, especially punk music. Social Democrat Mayor Egon Weidekamp said: “They get a house; we get peace.”

They were told that the house would not be sold, but if it were then the city would make another location available.

Those who have run the house were those who used it. An estimated 200-300 core people made decisions collectively. They ran concerts with no intent to make profits. Entrance was free or at a low fee. Vegetarian food, which the youths prepare, and beer and wine have been sold at just above cost.

Most groups which played there were not widely known, exceptions being Bjork, Nick Cave and David Rovics. In a given week, around 1000 youths used the house and attended concerts.

Following a fire in 1996, another Social Democrat mayor and the council majority (38 to 15) decided to “sell the problem”. But it wasn’t until 2000 that it was actually set to sale. Between November 2000 and September 2001, a cover firm-in-formation (Human A/S) bought the house for Father’s House.
Father’s House is a supporter of Zionism and it rents a property in Israel for retreats. Since its founding by the Evensen family, in 1990, it has been connected to right-wing Christian revivalists in the US.

Ruth Evensen sees herself as an apostle. She told the media once that she saw autonom youth with signs mocking evangelist Christians God told her to buy the house and kick them out.

The Youth refused to move and went to court. They lost in 2004 and the city council told the sect it could throw them out. An appeal was made to a higher court, which supported the lower court in summer 2006.

A recent Gallup poll showed that 57% of Norrebro residents (where the Youth House was) supported their right to have a place.

Following the loss in court, there have been several large demonstrations of support. Many neighbours and progressive groups conducted the largest support demonstration last December 14. About 5000 people marched peacefully through the city to protest the bailiff’s decision to send the police in and turn over the building to Father House.

Two days later, about 1000 activists assembled by the house to protect it. The police surrounded them and unleashed dogs, beat many with truncheons, shot tear gas at people, and used speeding vehicles to disperse people. They arrested 273 people. All but three had to be released within two days as there was no evidence they had committed any crimes.

Since December, squattings of other empty buildings have occurred with arrests by police. In all, around 1500 people have been arrested since protests began, and several support groups have formed. Initiative for a New Youth House, Parents against Police Brutality (PAPB), and Citizens Group for Youth House—comprised of 120 neighbours—among them.
In these days of police control, PAPB said that the police chief, Hanne Bech Hansen, “criminalizes all Youth House participants and sympathizers when she calls us `trouble-makers, rough necks and hooligans”.

“The Youth have tried to find a peaceful political solution for years. The police used truncheons, dogs and tear gas without warning. One 13 year-old girl was set upon by four policemen. She and her mother were arrested. One authority told the girl that if she were arrested again she’d be taken from her mother’s custody. This is all unacceptable for a state that is to protect the citizenry.”

Fond Jagtvej 69 attorney, Knud Foldschack, told the media that all this was unnecessary. The Fond tried to negotiate a purchase from Father’s House with increasing offers. It also tried to convince the city to hand over an empty building to the youth or it would buy it for them. Foldschack said that a political solution was close at hand, and negotiations should have continued. Instead, the mayor went on a ski vacation and some unannounced authority decided for the police solution.

Jan told this reporter that the Social Democrats are “traitors to their own history”. “They have become anti-working class. When you get into power then you see all others not in power as competitors.”

Politicians from most political parties have expressed “joy” that the “police have hit hard”. City Council Conservative politicians Jacob Naesager and Rasmus Jarlov, for instance, said:

“The autonom are not people with whom one can negotiate or give any rope to. There has never been a time when such use of police power has been more appropriate.”

The mass media, especially television, has followed the politicians’ viewpoint by usually reporting only their version. During the first day of police “clean-up”, many people responded by throwing cobble stones and bottles at police vehicles or bodies, and this was the main TV item.

In one two-hour TV special, the demonstrators’ point of view was absent. The TV channel (DR1) simply gave their microphones over to the politicians and policemen.

The Youth demand another house but it is unlikely they will obtain one with such high ceilings and unique acoustics. Nor will they let well-meaning private persons pay for a building which has already been paid for with taxes. They know that the city has many empty buildings and that one of them could be given to The Youth without “profiteering” and “censorship”.
“A house can be torn down but a culture cannot be. We’ll get a new place. In the meantime, we’ll gather where we can. We’ll party and we’ll protest until we win,” demonstrator Jeppe said.

Father’s House plans to build a new cultural house, “where all are welcome, not just a hard-core,” the self-proclaimed apostle Ruth Evensen declared to the media.

She said it might be a year before they’ll begin building, but Byggefag Samvirke spokesman Anders Olsen said unionists will not build it and if un-unionized attempt to they will be met by unionists.

There have already been support demonstrations in 20 European cities. There will be many more. The next one planned is for Women’s Day, followed on March 10th by an international action day.

(Printed by axisoflogic.com and another version by Morning Star daily UK newspaper)