The twenty-first century calamity that happened in Sri Lanka augurs unpropitiously for the Palestinians in Palestine. In 2009, the Sinhalese majority — backed indirectly by many nations of the world including Canada, the United States, China, India, Iran, Arab states,1 Israel, and (what author Ron Ridenour and other solidarity activists find most surprising) Cuba, Venezuela, Bolivia, and Nicaragua — militarily defeated the Tamils. 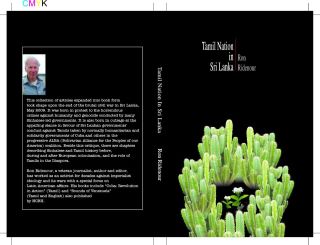 I had known that many Tamils lived in Canada having escaped persecution back home. However, in 1997, I became more intimately familiar with the civil war in Sri Lanka while working in Maldives. Many of the workers — and some of my colleagues — were from Sri Lanka. I heard complaints that Tamils were discriminated against because of their language and religion. Worse were the tales of bloodthirsty pogroms of Sinhalese against the Tamils, including torture, murder, rapes — all this committed by Buddhists, people supposedly seeking enlightenment.

Tamils are victims of Sinhalese, but one cannot escape the conclusion that they are also victims of themselves. This comes through in the details of Tamil Nation in Sri Lanka, although the author leaves this mainly for the reader to piece together. The solidarity of the Tamil people is underwhelming.

Ridenour holds, “The Tamils have every right and need to exist in peace and equality, and this is possible only if they have their own state.” The first clause is axiomatic from any human rights-observing person; however, the second part is more open to dissension. There are plenty of examples of different ethnicities eventually coming to a more-or-less peaceful co-existence within the same state. Sometimes autonomus regions can grant the equal human rights desired by all humans. However, circumstances certainly indicate that the Sinhalese were disrespectful of the rights of Tamils and tried to impose — violently, if need be — their nationalism, language, and religion into every nook and cranny of Sri Lanka.

Tamils, of course, had every right to resist and agitate for their rights. Would partitioning the geography of Sri Lanka solve the situation, as Ridenour alludes? Or would it have served as a durable cause célèbre for Sinhalese to reunite the island? As Ridenour notes, the Tamils had a de facto state. What if they had more earnestly negotiated from the strength of their position of de facto statehood toward securing an autonomous Tamil region within a Sri Lanka nation (as an acceptable fallback position from separation)?

Very importantly, Tamil Nation in Sri Lanka provides a historical backdrop to the Sinhalese-Tamil civil war, starting with the first humans in Sri Lanka and working forward. Ridenour writes that a Tamil presence dates back many centuries in Sri Lanka. Both the majority Sinhalese and minority Tamils have India as their origin. The European invasions and colonization of Sri Lanka (Ceylon) began in the sixteenth century, and were enabled by the lack of solidarity between Sinhalese and Tamils. During their colonial rule, the British brought over Tamil coolies to work the plantations.

The Tamils did economically better under British administration than Sinhalese causing envy and friction. The majority Sinhalese sought to exert themselves through making their religion, Buddhism, the sole national religion and their language, Sinhala, the sole official language. “The Tamils history in Sri Lanka is one of constant and widespread discrimination.” These chauvanistic moves were followed up with bloody violence wreaked on the Tamils, which Ridenour argues, fit the legal definition of genocide.

Eventually, Tamils formed resistance groups that defended Tamils and pressed for a Tamil state where they felt they could be free from Sinhalese discrimination and violence. The best known group was the Liberation Tigers of Tamil Ealam (LTTE) who were no stranger to using extreme violence and were declared terrorists by many, although Ridenour puts this label into perspective.

“Really, if I starve the Tamils, the Sinhala people will be happy.” President Junius Richard Jayewardene was quoted in the Daily Telegraph in 1983. Strangely enough, many so-called terrorists are victims of genocide.

Tamils did not just fight Sinhalese military. Tamil rebel factions fought each other; Tamils fought the Indian “peacekeepers.” The Tamils were adept at finding enemies to fight, but what allies did Tamils find?

Even the Marxist Janatha Vimukthi Peramu?a (People’s Liberation Front) was opposed to a ceasefire with the Tamils, calling it “part of a western conspiracy to destabilize, divide and re-conquer” Sri Lanka. Yet, if the reasoning proffered by Ridenour for Marxist reluctance to lay down arms is correct, then it exposes a gaping contradiction among the Marxists: they preferred to fight a divisive civil war to avoid being divided.

In the end, the deep divisions among the Tamils would be their very undoing. The egos of LTTE “leader” Velupillai Prabhakaran and Vinayagamoorthy Muralitharan (Colonel Karuna) in the East split the Tamils further. Karuna disobeyed orders for the transfer of his fighters, and Prabharakan expelled him from the LTTE. Karuna went over to the Sri Lankan government side.

Now the LTTE was forced to fight the government troops and three Tamil paramilitary groups. It was a losing proposition for Tamils.

Ridenour attempts to answer the question: Why the Tigers failed? The question also implies why the Tamil people failed?

Among the reasons, Ridenour points to Karuna’s defection, Prabharakan’s authoritarian leadership, his reliance on conventional warfare rather than guerrilla warfare, and Prabharakan’s brutality.

The Tigers defeat was ultimately a defeat for the Tamil people. They were a house divided. There was no unity between Sri-Lankan Tamils and Indian Tamils, no unity between Tamils and Muslims, and, of course, what unity can one expect from within an ethnicity that has an oppressive caste system? There was even divisiveness among Tamil fighters; they had to defend against each other as well as Sinhalese fighters. This is hardly a successful strategy for liberation.

A whirlwind of genocidal ferocity engulfed the Tamil people. The western media reported little of it; after all, it did not directly involve western fighters. The Tamils have lost control of areas they held in the north and the east. Ridenour writes of “enforced disappearances” of Tamils, maybe into the human trafficking market that opened. Sinhalese subsequently were being “settled” into Tamil areas and homes.

UNICEF spokesman James Elder spoke of the children’s “unimagineable suffering,” now no longer recruited as fighters are instead coerced into prostitution, sex trafficking, and alcohol smuggling.

The Sri Lankan defense ministry triumphed its ”humanitarian operation” victory as one with zero civilian casualties. Ridenour pointed to the videos that appeared on UK’s Channel 4 which belie that defense ministry claim.

There is a substantial Tamil diaspora that has begun to organize internationally. A young Tamil socialist, Sharmini Lathan, seems to know the way out of the morass. He told Ridenour: “We need to combine all our forces and struggles: Tamils, Arabs, Latin Americans… We need to help each other, [sic] because we have common problems and goals.”

That the United Nations accomplished nothing to protect humans from the scourge of war in Sri Lanka was unsurprising. Of some surprise was the non-solidarity not just among the Sri Lankans; it was among Arab states, leftist states such as Cuba, Venezuela, Bolivia who abandoned Tamils. It leads Ridenour to a sad conclusion that “we are heading for moral collapse, and then fascism throughout much of the world.”

Clearly, the Tamils were discriminated against; they were persecuted; and they were forced to resist violently. They resisted largely with minimal support of leftists, communists, and revolutionaries elsewhere. Ridenour found out what he could about the Tamil struggle; he held to to his moral and ideological principles. This single person did not turn his back on the Tamils on the other side of the globe, and he called his fellow leftists out on their lack of solidarity.

Tamil Nation in Sri Lanka gives the background information necessary for the reader to become informed of what led to the civil war and its still unfolding aftermath. Ridenour criticizes the lack of leftist solidarity with the Tamil struggle, but how much of the blame do the Tamils themselves share? One surely would not go so far as to blame any people for a genocide against them, but part of the Tamil struggle was internecine. Readers of Tamil Nation in Sri Lanka will have a solid base to discuss, research further, and form their own conclusions.

1.Yes, even Arab nations unmindful of or insouciant to how that reflects on their Arab brethren in Palestine.

Kim Petersen is co-editor of Dissident Voice. He can be reached at: kim@dissidentvoice.org. Read other articles by Kim.